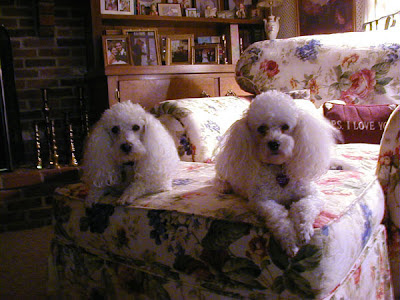 Introducing our resident Blog Dogs: Coconut and Fawn. Coconut became part of our lives right before Christmas 13 years ago, when I saw an ad in our neighborhood newspaper. Snowstorm or not, Jim knew not to try to talk me out of heading out in the near-blizzard conditions.

We were greeted by Rudy, who was only too willing to lead us into the ‘kennel’, which housed about a hundred cages of newly born poodles and shihtzu pups. My eyes fell immediately on a dirty-looking, skinny gray poodle with matted hair. I whispered to Jim that I wasn’t leaving without that puppy, and the rest is history. Jim was certain I'd lost my mind, choosing a grungy, malnourished dog over all the sweet, new little ones, but the moment I looked down at that dog, our eyes locked. His pleading eyes touched the depths of my soul. It’s a moment I’ll never forget.

At the vet’s the next day, I learned the year-old pup was a pure white poodle who had been severely abused. Rudy was running a ‘puppy mill’. After mentioning our experience to a good friend who owns Summer Wind Stables, Conni became instrumental in shutting him down. All the puppies were saved, and Rudy went to jail.

Jeff and Tom affectionately named the pup Coconut, after watching his mass of unkempt hair turn snow-white after we shampooed him about a dozen times!

Poodles are known for their intelligence, and I believe Coconut knew I had ‘saved’ him. To both the boys’ dismay, he bonded totally to me. Tom took his birthday money the next summer and bought a 6-week-old white poodle pup, who he named ‘Fawn’, because of his unusually-long-for-a-poodle legs!

And you guessed it….Fawn bonded to me, too! Puppies always know who the mama is! So….Coconut and Fawn are my constant companions and mascot “Studio Dogs”. They can always be found wherever I am, usually curled up together under my computer desk, or in my studio cuddled up on the loveseat. Their only ‘job’ is to visit Governor’s Village with me whenever I go to see Mom. Everyone there knows them by name. They brighten many-a-resident’s day whenever they walk in the front door. So….(you knew there really was a point to all this, didn’t you?!) I created a Poodle Necklace! You can find it in my Etsy shop! 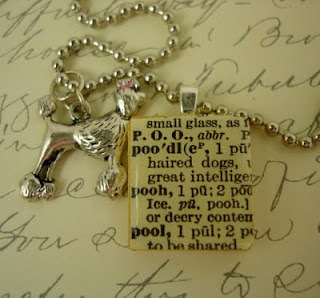 Posted by rosecreekcottage-carol.blogspot.com at 7:26 AM

My first visit here - all the way from Australia.

Thank you so much, David! I hope to see your beautiful country one day!

Hi Carol, thanks for dropping by mine, thank goodness you went out to that dreadful place that day, and were able to give a loving home to dear little Coconut. May the creep rot in the slammer, I can't abide anyone who abuses animals.

Omg they are darling!! I LOVE poodles!! Unfortunatley my husband is allergic to them :-(

You did an amazing thing by shutting Rudy down!!

Your poodles are beautiful!

Thanks for visiting us at greysandthings.today.com