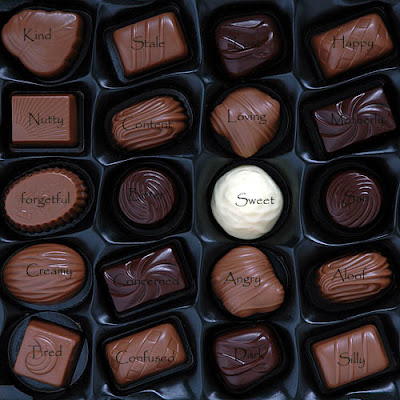 Mom’s been doing amazingly well these days, in spite of her alzheimer’s. The ‘normal’ windows seem to be lasting longer and longer. I don’t know why, but I find myself actually forgetting that she even HAS alzheimer’s!

Lately, she’s very concerned about how I am, if I’m working too much, and whether I’m sleeping at nite. It’s really quite dear. She actually told me last nite not to come to see her today if it would be better for me to stay home and work in my studio. She’s NEVER said that before. It brought me to tears.

She’s noticed that I’ve lost too much weight these past few weeks, and like any mother, she’s worried. It felt so good to know she remembered to tell me to eat. “Little bits” she said. I told her that I loved her for that. “For what?” she asked. “For worrying about what’s best for me” I said. “Well….what kind of a mother would I be if I DIDN’T?”. Yup….she is indeed a good mother. Even during the times she’s confused and forgets.

My visits with Mom truly ARE like a box of chocolates. You just never can tell what you’re going to get when you walk into her room, or call her on the phone. When alzheimer’s rears its ugly head, you’re very likely to come up with a very bitter, nutty piece of stale chocolate. When it ‘comes-and-goes’ during our visits, the chocolate you get is one with rich, creamy filling. And when the visit is perfect, the one you get is such a decadent piece of rum-soaked goodness that it makes the sides of your mouth turn upward in the most pleasing kind of smile. It lingers on your tongue, and in your mind for a long long time. Those are the sweetest visits. The ones that let you know that all is right with the world. With her world. And with mine. 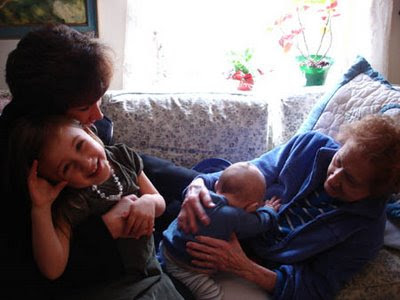 This post won Post of the Day
over at Authorblog. Thank you, David. I am so very honored!

Posted by rosecreekcottage-carol.blogspot.com at 6:58 PM 51 comments

Labels: alzheimer's, assisted living, Forrest Gump, Life Is Like A Box Of Chocolates 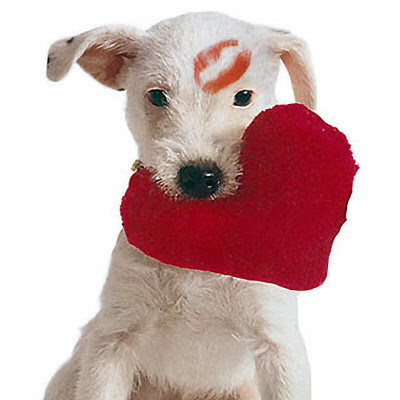 ~May your day be filled with every kind of love, much peace, gratitude.....and LOTS of chocolate~

~From All of us at RoseCreekCottage Studios~

Posted by rosecreekcottage-carol.blogspot.com at 9:16 AM 12 comments 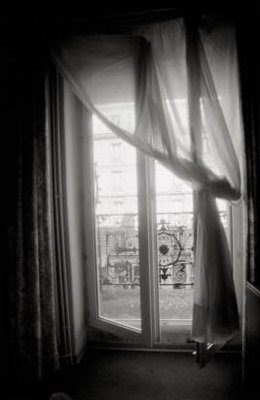 Whenever God closes a door, He opens a window. So many times, we wait and wait for the door to reopen. We stare impatiently at it. We shake angrily at the lock. Why did it close? Why isn’t it opening? We are so focused that we fail to see that right there, nearby, is the wide-open window. Fresh. New. Waiting.

Thank you, God, for the doors that are closed, and the windows that are open. Your Fingerprints are truly everywhere. We just need to open our eyes and our hearts to see them.


Take a peak at Beki’s blog for more Fingerprints.

Blessings to each of you on this Friday~
Posted by rosecreekcottage-carol.blogspot.com at 7:45 PM 16 comments 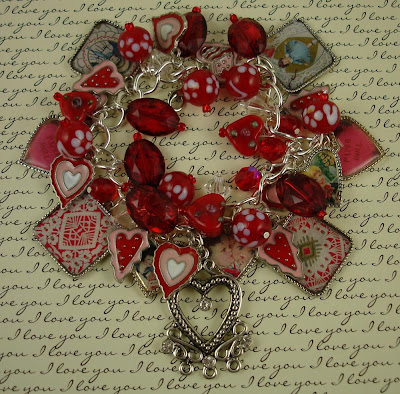 Ah....Monday again. I have lots of new creations on my workbench right now. It seems that the 'cocooning' feeling that the winter cold brings on here in the midwest is VERY good for my creative juices! And....Valentine's Day is on Saturday.

I have many designs in my Etsy shop that would be perfect gifts to say, "I love you" to the special sweeties in your life. Here are just a few:

The top photo is a perfect Sweetheart Bracelet, consisting of 9 altered art charms created from vintage valentines. Tucked in between are red-and-white polka-dotted lampwork beads, red elongated crystals, and lots of silver enameled heart charms. IT IS SOLD! 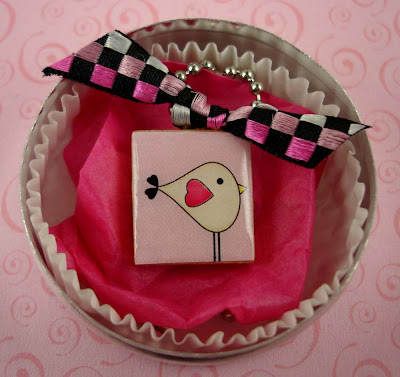 The second photo is from my Truffles Collection for Tweens, Teens....and of course, playful adults, too. It's called, "Lil Tweetheart". It's a scrabble tile necklace, sealed with a non-toxic topping for permanence and durability. It comes in a truffle cup tucked into a little clear-topped tin. The perfect little gift that says, 'I love you'. 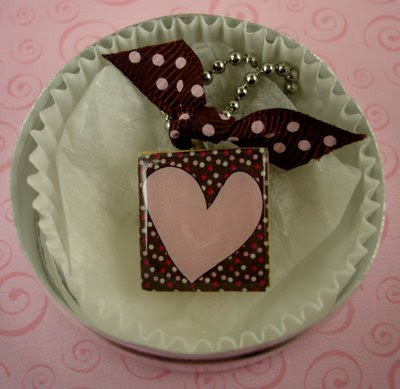 Or how about some Chocolate Sprinkles? Another sweet Truffle necklace nestled in a truffle cup tucked into a clear-topped tin.
Delicious!

There's lots more in my Etsy Shoppe. Just click on the link to the right!

Posted by rosecreekcottage-carol.blogspot.com at 11:47 AM 11 comments 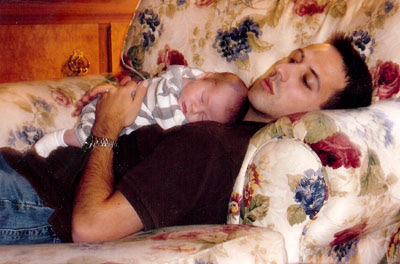 From the first moment you feel a little life growing inside you, you love him. Deeply. You raise him as best you can. You nurture him physically. You teach him the necessary tools he will need to travel life's paths. You give him a strong foundation of values. And hopefully, you place him on the right spiritual path. And then.....you give him wings to fly on his own....much like a mother bird gently, encouragingly, pushing her little ones out of the nest. And then.....you pray that what you did was enough.

Tom.....I couldn't be more proud of you. You have been our rock these past few weeks. Always there. Steadfast. Through the tears. The fears. You reversed the role of child/parent so fearlessly. With great strength. I love you for that. You are the perfect example of the Fingerprints of God in action.

Take a peak at Beki's blog to see links to more Fingerprints.

Have a blessed Friday....wherever you are!

Posted by rosecreekcottage-carol.blogspot.com at 7:43 AM 20 comments 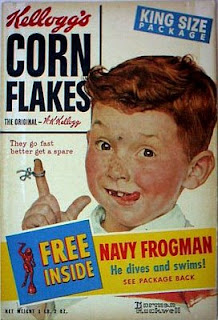 Do any of you remember those tantalizing adds on the very fronts of those ‘certain’ boxes of cereal that claimed to have the very best prizes inside….and the best part of all, was that they were ‘free’? Really. They were. Yeah, I know….my mother didn’t believe it either.

Those Saturday morning cartoon shows made sure they covered every single brand of cereal, and were sure to show just how ‘wonderful’ the prize inside was. And to convince all of its kiddie-audience that they really really ‘needed’ the particular magical miniature slate, ring, magic trick or diving frogman. I mean really. You didn’t want to be the only kid in your class that didn’t have one, did you?

My brother, sister and I would put on our very best angelic faces and earnest sounding promises of how we would eat ALL the Corn Flakes in that box. Just because none of us really LIKED cornflakes was inconsequential.

No sooner had that ol’ DeSoto pull into the drive when Mom arrived home from the store, our grubby little hands had reached to the very bottom of that cereal box, grinning as we pulled out ‘the prize’. 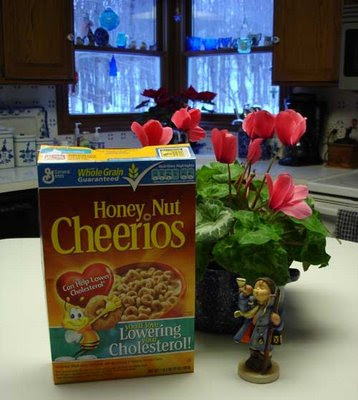 When I received a package in the mail from my sister the other day, I smiled as I ripped off the brown paper to find a large box of Honey Nut Cheerios. I grinned. Then giggled as those memories flooded back to me.

The significance of that particular brand of cereal to my sister and me: my two poodle pups, and Kathy’s one poodle pup will pirouette on their hind legs for Honey Nut Cheerios! They LOVE them!

I anxiously opened the box, fully intending to pull out a handful of those sweet little round ‘O’s’……but instead, felt FUR. Uh-oh. I was a little disappointed. And a wee bit leery....but lo and behold,

I pulled out the sweetest bear. With wings. Cranberry-colored velvet ones. As I sat the bear on the counter so I could stand back and admire him…..there on the bottom of his paw was “Angel of Hope” embroidered in cranberry lettering! 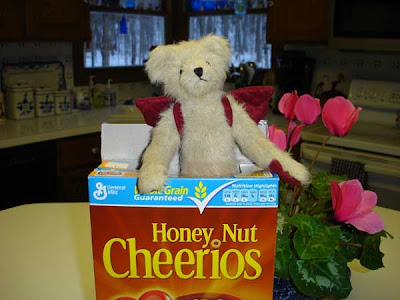 Thank you, Toots! I carry him from room-to-room. And that cereal box……I’m never throwing it away. It has a place of honor in my studio. Memories don’t get much sweeter than that. And neither do sisters! 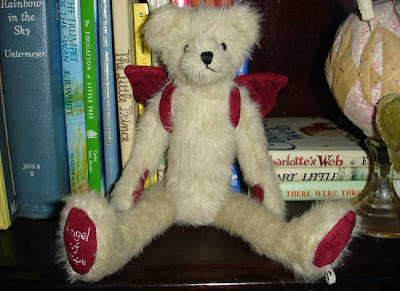 Posted by rosecreekcottage-carol.blogspot.com at 9:39 PM 10 comments 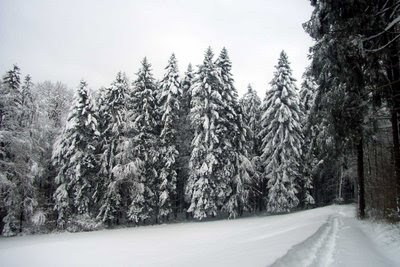 It's winter in Ohio
And the gentle breezes blow
Seventy miles an hour
At twenty-five below.
Oh, how I love Ohio
When the snow's up to your butt.
You take a breath of winter
And your nose gets frozen shut.
Yes, the weather here is wonderful.
I guess I'll hang around.
I could never leave Ohio
'Cause I'm frozen to the ground!
Posted by rosecreekcottage-carol.blogspot.com at 8:34 AM 12 comments