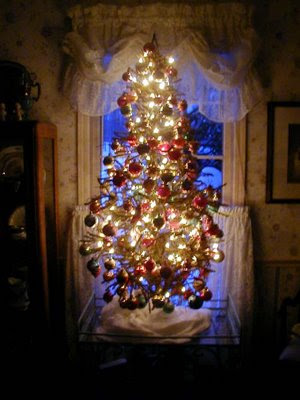 Thank you for this year of my life….and letting me celebrate another Christmas Season here on earth. Thank you for helping me make some difficult decisions this year. I struggled with many of them, yet You continually show me that the choices I made were the right ones.

Thank you for blessing my life with Jim. I don’t know what I would do without him. I know you orchestrated our meeting those many years ago. He’s the best husband and father on this earth. I can’t think of anyone who I’d rather travel this journey with.

Thank you for my two sons, Jeff and Tom. They are happy, sensitive young men….pursuing their dreams, with your guidance, Lord. Please keep them in the palm of Your hand and continue to guide their choices along the way.

You knew how much I wanted a little girl, Lord, but I was patient, and you sent me Jackie….the sweetest daughter/daughter-in-law ever. And then……Ella Layne: beautiful beyond words….all ‘girly-girl’. And : what can I say?? He makes my face hurt from smiling so much.

Thank you for granting me another year with my Mother. Her daily struggles keep me focused on what life here on this earth is all about: the prize....not the journey.

Thank you for the friends you have scattered throughout my life. For the ‘temporary’ ones….who leave their footprints on our hearts and continue on their own paths....and for the ‘long-term’ ones. They are all an amazing testimony of Your love.

Thank you for my health. I am doing my best to take good care of myself….spiritually, emotionally, and bodily. I don’t want to ever abuse these gifts You’ve given me.

And thank you, Lord, for giving me the faith you have blessed me with. It makes all the pieces of my life fit together in a beautiful pattern….even during the hard times.

Lastly….Bless my godmother, my dear Aunt Kay, who finished her journey here on earth, and is spending Christmas with You this year. She will be very missed. I was honored that you let me spend those last 3 days with her. I wouldn’t have missed them for anything on this earth.

Posted by rosecreekcottage-carol.blogspot.com at 8:47 AM 19 comments 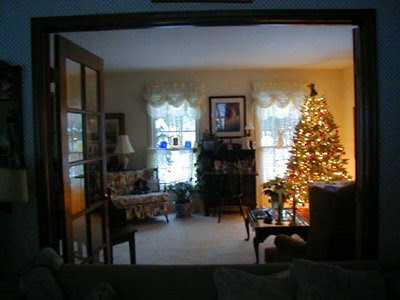 'Home for Christmas' never meant as much to me as it does now that I have raised a family, and the kids have grown up, and left to live their own lives, in their own homes. Yes...I always treasured going to my parents and in-law's house on Christmas Eve. It was tradition. It was the Christmas that I had known my whole life. But all-of-a-sudden, that Christmas Eve tradition doesn't happen anymore. My in-laws and my father are in heaven now for Christmas Eve. So now, we have a new tradition: the kids and grandchildren come home to US.

Our home is now the one they travel to to celebrate the birth of Jesus. Home to our tree. Our presents. With their presence.

We are building a whole new set of traditions. A whole new set of memories our children and grandchildren will recall fondly once we are celebrating Christmas in heaven. Fingerprints to be sure!

May you have a memorable day today. Be sure to look for the Fingerprints in your life this Friday in December....wherever you are in the world!

Stop by Beki's blog to read about more Fingerprints! 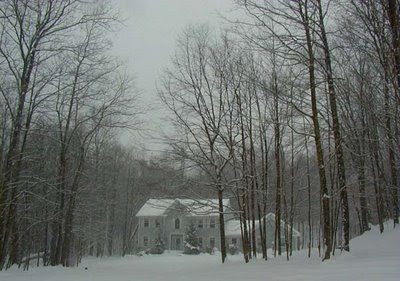 Posted by rosecreekcottage-carol.blogspot.com at 5:39 AM 13 comments

~The Man On Pickle Road~ 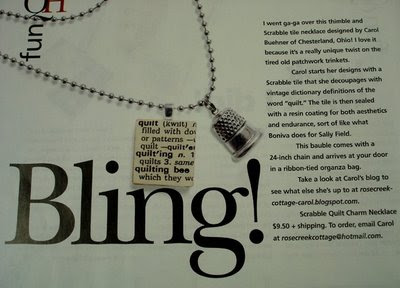 You can’t imagine my surprise when I received an email from a 'man', about my Quilt Necklace. And he asked that I call him, as he was the editor of a quilting magazine, Quilter’s Home. Not in the habit of calling men who email me out-of-the-blue, it only took a second for me to realize that if this man truly WAS the editor….this could be a good thing. So I called him.

My next surprise came when he apologized for the background ‘noise’, as he was feeding his chickens. Okay. He had me right there. You gotta love any man who’s the editor of a quilting magazine and has chickens. Oh…and did I mention he lives on ? I was putty in the palm of his hands. I fastened my seatbelt. Or so I thought!

As we talked, Mark explained that he had stumbled on my vintage dictionary definition Quilt Necklace on Etsy. And he loved it. He wanted to include it in his Jan-Feb issue. I thought the timing was perfect: right after the Holiday Rush. I’d have time to stock up on them. Silly girl……Jan-Feb issues come out in……….you guessed it: December. So when the email orders began flooding my mailbox yesterday, I wasn’t ready. Not in the least!

Getting back to my phone call in the fall, I immediately called one of my quilter friends, who shouted into the phone: “Carol…..is it Mark Lipinski? I mean, is it THE Mark Lipinski??” Well, yeah….I supposed so. Why?

Until 3 years ago, Mark had been an Emmy-nominated daytime tv producer for several shows including The View. He had been a producer in daytime television for 25 years. He knew his audience: women, and to quote him, “When I started teaching quilting, I knew those ladies were just wild and out-of-control. They were fun and irreverent. They were successful in their own right…..”. Just like him!

The other thing I think you need to know about Mark, is that he’s zany. Fun-loving. Quirky-in-a-delightful-way. Funny. Another friend quickly told me she was always ‘closed out’ of his quilting classes at Quilt Market each year. I think it’s safe to say she actually has a ‘crush’ on Mark Lipinski…and has never even met him!

QH articles range from decorating, to relationships (“Is He Cheating While You’re Quilting?”), recipes, fitness and fashion (“Hide Your Quilter’s Spread”). What Mark wants his readers to know, is that quilting is fun. And he has accomplished just that! 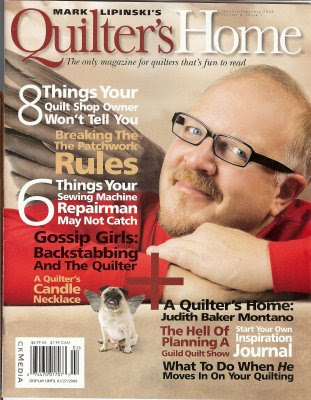 Thank you, Mark. As much as I've been literally 'slammed' with orders this month….I am honored to be a part of your wonderfully zany, fun-filled publication! My necklaces are already winging their way to Sweden, the UK, Germany, Finland, Australia and to many homes and quilt shops around the US because of your magazine.

Oh... watch out: Someday I may just show up as you’re feeding your chickens on ! I'd love to meet the man behind this creative work-of-art!

Posted by rosecreekcottage-carol.blogspot.com at 7:31 AM 13 comments 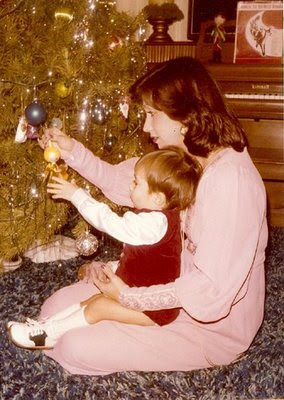 Each Christmas I find my heart and my home flooded with memories of long-ago Christmases. Each one has its own distinct 'fingerprint'. We had our sons seven years apart....so Jeffrey, our oldest, had many Christmases with Mom and Dad all to himself. And oh did he have our undivided attention! I just couldn't imagine loving another child as much as I loved him. I feared that I couldn't 'mother' any child with the passion I had for this child. Yes...he was covered in God's fingerprints. I was happy to be the mother to this brilliant (of course!) precious child of God. I would dedicate my life to being the best mother I could be.

Jeffrey got on his knees every nite before bed and prayed for a baby brother. I tried my darndest to persuade him to pray for a baby 'sister'....to no avail! You know what they say about God always listening closely to the prayers of children. He did. And He sent us a new little set of fingerprints when Jeffrey was almost seven: Tommy. We were blessed with another brilliant (of course!) precious son.....and then there were two. The fingerprints continued.

We were going to name this new beautiful bundle, Ryan. Much to our chagrin, Jeffrey refused to call him 'Ryan', calling him 'Tom' after his favorite person in the world: his cousin and our Godchild, Tom. And although I had two gold little boy charms Jim had already had engraved with 'Jeffrey' and 'Tommy', you guessed it: Jeffrey won. We named our new little one Tommy! (Our Godson, Tom is Tommy's Godfather!)

The next Christmas we had two sons. They are the greatest gifts God could ever have sent us. I get very nostalgic each Christmas as the memories flood my heart and my mind with those long-ago memories. Sigh. They seem like just yesterday.


May you have a memorable day today. Be sure to look for the Fingerprints in your life this Friday in December....wherever you are in the world! 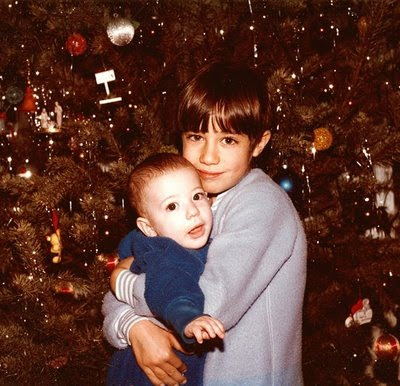 Stop by Beki's blog to read about more Fingerprints!


Thank you, David for the mention on Post of the Day!

Stop by his blog for some fine reads! You'll be glad you did!

Posted by rosecreekcottage-carol.blogspot.com at 6:30 AM 26 comments 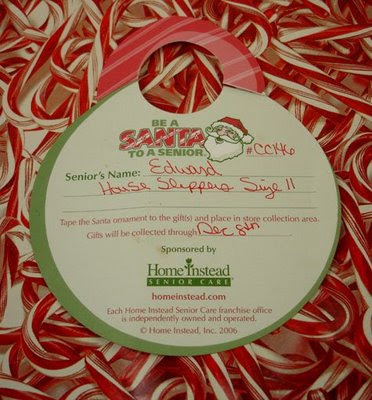 It's that time of year again, when our thoughts turn to 'gift-buying'. This year will be a meager one for many people because of the state of the economy, not only here, but around the world. With people out of work, so many foreclosures on homes and businesses.....we are in a recession. There. I've said it. The government is afraid to....but ask the people it's affecting: the family man who was just laid off and doesn't know how he's going to tell his wife and kids; the single mother-of-four-under-ten who doesn't have enough money to feed her children, let alone for presents; or the 92-year-old man who has let his prescriptions lapse or is taking only 'halves' of pills because he can't afford to take the recommended dosage he REALLY needs.

Last year, a friend made a comment about seeing a very cold, Salvation Army Bell-Ringer standing in the freezing cold, ringing that bell for money for the poor. She bought a hot chocolate for her. The woman was very grateful. Because of her, I never pass one of those Bell-Ringers without bringing them back hot chocolate. The last one had tears in her eyes and said no one had ever been so thoughtful. It's the little things like that. It certainly didn't cost much. Just time and a bit of effort.

My mother's assisted living facility has a Christmas tree in the lobby that has ornaments with names of the elderly in our area that are in need of things like clothing, toiletries, etc. It's called "Be A Santa To A Senior". One of the ones I picked up is for slippers for Edward, size 11. I bought him a nice pair of black cozy Deerfoams for Men, and will wrap them today and take them there with the other gifts I'm donating. Our church has a Giving Tree with names of people who are in need of things like gas for their cars, prescriptions to be filled, warm gloves, etc. There is Toys for Tots, Coats for Kids, Womensafe, etc. Choose one...or several. Our county's Social Services has names of families in need of many things. A group of my friends here pick a name and make sure the family has everything for a spectacular Christmas: presents, warm clothing, Christmas Dinner.

So....I'm posing the question: What will YOU do to give back this year?? . I'd love it if you'd come back here and post a comment telling what you will do. I think it will be a great inspiration for all of us.

Posted by rosecreekcottage-carol.blogspot.com at 7:46 AM 20 comments