~Angel In the Kitchen~ 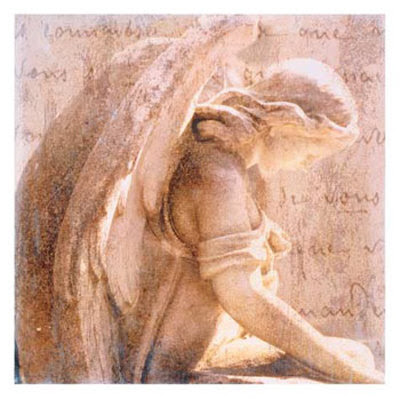 ‘She’ first came to me very late at nite in the summer of 1993. I say ‘she’ because she had a strong, feminine voice. I may be wrong. But it’s how I think of her. I couldn’t sleep. I often find myself sitting in the kitchen in the middle of the nite on those kinds of nites.

My business had really grown since its start in 1989. I was doing over 20 art shows, as well as wholesale shows in Philidelphia, and , twice a year. I had hundreds of shop and catalog accounts. I had eight employees. Several sales reps out in the field around the country. I was working 16-hour-days. You could say I was on “auto-pilot”: so revved up on caffeine and adreneline, there was no stopping me. Until that nite in the kitchen.

I was sitting on a stool at the island. Drinking iced tea. Just sitting. Tired. But content. At 17 and 10, both boys were doing well in school. Jim was quickly climbing the corporate ladder. Life was good. Her loud voice permeated the dimly-lit room. “WHHHHHOOOOOOO ARRRRREEEE YOU?” it boomed. I jumped. My heart was beating fast. I wasn’t really scared. Just startled. She filled the room with her presence. I knew what she meant. I had NO idea who I was. Yes….I was a mother of two sons. A wife to a man I adored. But had I lost ME??? Was there any ‘me’ left?? I sat there for a long time. She never said another word. She didn’t have to.

I was a great goal-setter. I’d set them each December for the upcoming year. When they were met, I’d set the next year’s goal higher. I’d always meet them. And so it continued. Like Topsy, the business grew and grew. One of my oldest friends, Babs, asked me then, “When is it enough?”. Why, it was never enough. There were always higher mountains to climb. Until that nite in the kitchen. I knew I was on the wrong path. I needed to make changes.

I got rid of my sales reps, and cut down my wholesale accounts to just my original shops and catalogs. I dropped my shows down to half the number. Much more ‘doable’. And I made time for me. I re-joined a health club, signed up for aerobics classes….and actually went to them! I was much healthier. And happier.

That wasn’t her last visit. She speaks much more quietly now. She knows she needn’t ‘yell’. I know when she’s here. I can almost predict when she’ll come. Like last nite. She knew I needed her visit.

It’s been a hellacious week with Mom. And we’re all so tired. And scared. Specially Mom. I pray that Mom has an angel that will fill her with the peace that my Angel gives me. I know she has one. It’s an . I know because of Mom’s description of him. Very very tall with HUGE wings showing past his shoulders and reaching down to the floor. I hope he’s with her this week. She needs him.

Postscript: Mom was admitted to the Geriatric Psychiatric ward at a nearby hospital yesterday for observation. Taking her there was the single, hardest thing I've ever had to do. She is very confused and scared. And very angry at me for taking her there. Please keep her in your prayers.

Posted by rosecreekcottage-carol.blogspot.com at 5:01 PM 27 comments 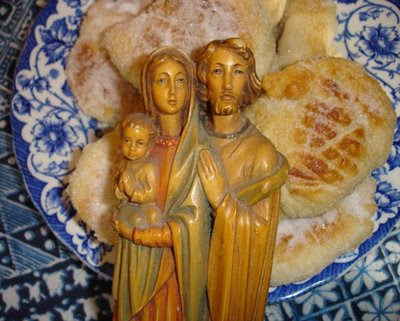 St. Joseph, the husband of Mary and the earthly father of Jesus, is said to be the patron saint of home, family and laborers. His Feast Day is celebrated on his birthday: March 19th. It's a Sicilian tradition to make Fritelles or Fried Dough on that day. Depending on the region of Italy you are from, they may be called zeppole, or sfinges instead. For an interesting picture collage of fried doughs from all over the world, click here.

My Nonna always used her homemade raised bread dough to make Fritelles, as did my Mom, but I've found that the frozen Rhodes bread dough works quite well....and is way easier!

All you do is tear off about 2 inch pieces of the raised, raw dough, and fry them quickly in about a 1/2 inch of hot canola oil. Drain them on paper towels, then roll them in granulated sugar. My Mom often tucked raisins into the raw dough before frying. I make one batch with raisins for the boys, and one plain batch for Jim. One bite into the sugary, doughy delicacy will have you hooked. They rarely have time to cool before they've all disappeared...no matter how many I make!

Whenever I fry them up, I'm transported back into time......standing in my Nonna's or my Mother's kitchen, swinging my tanned legs back-and-forth, long curls flying, licking every last bit of the sugary coating off each of my fingers, begging for "just one more".

I continued the tradition by frying up batches of Fritelles for the boys on Sunday mornings in March before mass all the years they were growing up. It's a tradition that we continue to this day.....whether it's just Jim and I, or the boys, Jackie, and the grandchildren. Fried Memories at their finest~ 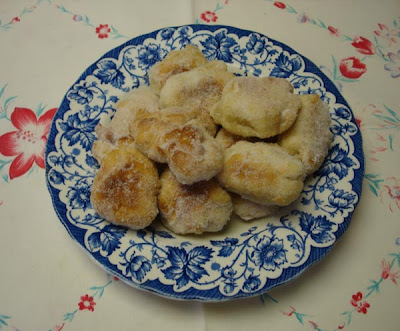 Posted by rosecreekcottage-carol.blogspot.com at 3:55 PM 11 comments 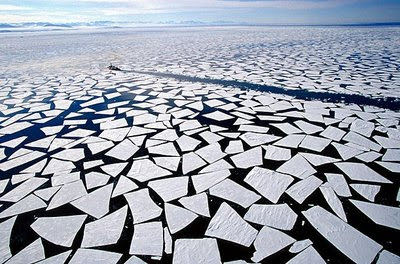 Mom had been doing so well....until last week. Wednesday nite I received a phone call from her. She was all out of breath. She was looking for her mother. Frantically. To say good-nite to her. My grandmother died 32 years ago. I had to tell her that. Her reply: "Stop it, Carol! WHERE is she? Is she with you?".

And the dance begins again. That dreaded two-step. The one where you're no longer on the familiar dance floor. You're on ice. Cracked ice. In bare feet. Cold. Uncomfortable. Uncharted territory that is becoming way too familiar.

I was able to settle her down that nite. For about 5 minutes, after which time she said to me in her best, 'motherly' voice, "Carol....I have to get off the phone now and go find Mom. I need to say good-nite to her". sigh. I had failed.

Friday nite I got a call from the head nurse. Mom was frantic. Even after been given a Xanax. "Carol....I'm still at work. Everyone's gone. I missed the bus. I have no money. What am I going to do?".

Nothing calmed her. She wanted to go "home". I packed a very ill husband into the pre-heated car, and headed to her assisted living facility. She was finally calm....but insisted on my taking her "home". After a long while of trying to get her to remember we had sold her house 3 years ago ("I KNOW that Carol"), I couldn't get her to tell me where she meant when she said, "home". She didn't want to come to my house....she wanted to go 'home'.

Can you imagine the terror you would feel, when no one around you understood what you wanted? The heartbreak of feeling that even your own daughter didn't understand....didn't meet your needs?

This continued through the weekend. There were many moments when I questioned whether she meant 'home' to heaven. I don't think so. But then again, maybe that's what she wants. To go 'home' and away from this hell.

For right now, we are all there with her. Trying to help her navigate the ice. Depressing? Yes. Heartbreaking? Yeah. But it's her life right now. And mine. I thank God each day when I walk into my studio, turn on the lights, and create. Escape. Live. It drives me into a world that is safe. And free of pain. At least for a little while. Until the phone rings again. 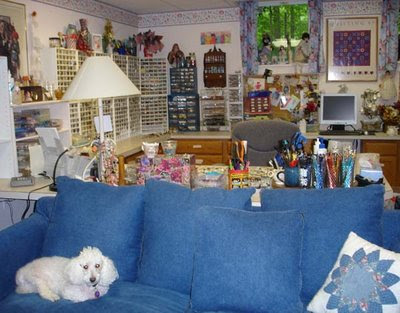 Posted by rosecreekcottage-carol.blogspot.com at 7:56 AM 40 comments 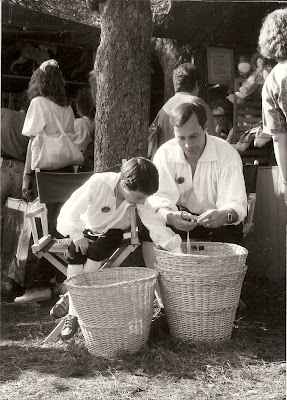 I'm excited to announce I've been accepted to one of the nation's premier shows, Yankee Peddler Festival. I did this show for 13 years, and only bowed out when my mom and dad became ill eight years ago. It is 3 weekends every September. This is the show's 37th year.

The show takes you back 200 years, visiting pioneer with master artists and crafters "setting up rustic shops along streams and amid lovely wooded dales, with foods and snacks cooked over open fires, and with non-stop entertainment across the 75-acre grounds. Keep up to the hour and follow events with the Town Criers. Visit with the militia and mountain men, or learn crafts with hands-on instruction. Visit with the master crafters and artists while they demonstrate the way they transform nature into something unique for you and yours."

When I first participated in this fabulous show, Tom was 6. That was 20 years ago! I managed to create 500 dolls....and sold out that first year! Shortly after, I quit my teaching job!! 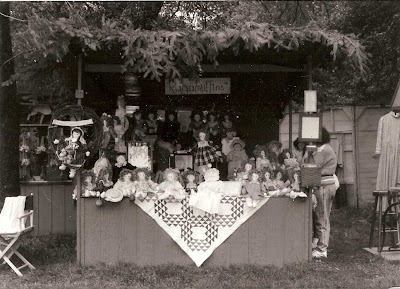 This has necessitated that I 'step up' my business and production plan for this year. As you can imagine, RoseCreekCottage is humming away quite early in the morning.....ending the days late at nite. The good thing: I LOVE it! As any artist knows, when you thrive on creativity, it's a 'drive' that you cannot ignore. It literally 'runs' you. (further explained in a future post!)

My show schedule is quickly filling up for this year. I've been accepted to 11 shows so far. That should keep me busy and out of trouble, don't you think? 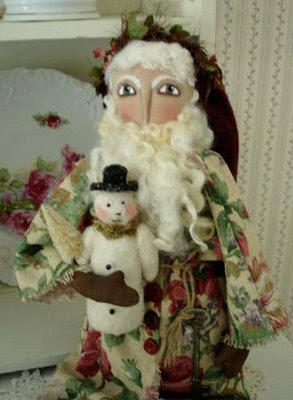 The first and second photos were taken at YPF in 1989. Aren't my 'boys' beautiful??

Posted by rosecreekcottage-carol.blogspot.com at 10:00 AM 20 comments

~Daffodils In the Snow~ 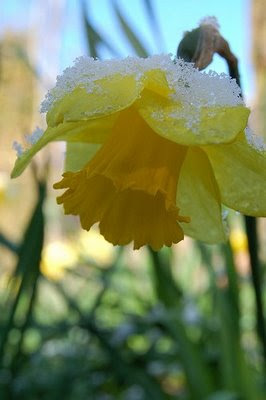 God's Fingerprints are found throughout nature. No one else could ever have created the miracles you see out in the world each and every day.

Here in Ohio, spring is finally starting to poke its brave little head through the snow. Daffodils in the snow are one of my favorite signs of Spring. They let you know that hope is truly alive and well, living in all its glory.

Take a peak at Beki's blog to see evidence of more Fingerprints.

Blessings to all of you this beautiful 'almost' spring day. Thank you for all the emails and prayers. They are much appreciated~ 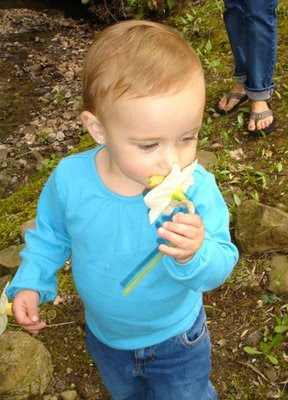 Posted by rosecreekcottage-carol.blogspot.com at 8:19 AM 23 comments