~Home Is Where One Starts From~ 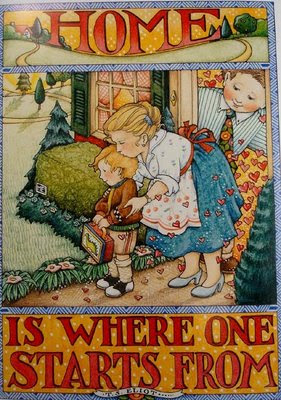 Coming Home. Always special. No matter where or what you call home. For me, now, seeing my kids come home is more special than ever….as they each have their ‘own’ homes. But coming home to where you started is always special. It’s safe. Filled with unconditional love. And the warmth and security of your parents’ open arms…and full refrigerators. It stands staunchly. Waiting. Filled with memories of childhood….schooldays…and homecomings.

Jeff arrived this weekend with Ella and Jackson. DIL, Jackie, had to work, so they came without their beloved wife and mother. (we all missed her!) There were lots of hugs and kisses. Lots of laughter. is walking…no, running… everywhere. No more crawling. Balls are his favorite toy now. And boy can he throw. And even catch! His face is always smiling….eyes dancing. He loves life. And Ella is an ever-moving girly-girl. We played Barbies. We colored. We put puzzles together. Over and over. We played Barbies. We baked cookies. We laughed. We worked on the ‘puter’. And did I mention we played Barbies? I suggested we only undress one Barbie-at-a-time, since it was cold out. “No, Grandma. That’s not how you play with Barbies. We take all their clothes off. Then we dress them. ‘Kay?”. Who knew?

And at nite….this mom/grandma got great pleasure out of tiptoeing into their bedrooms, and standing silently. Watching. In awe that they are my child’s children. My bloodlines. Magnificent miracles. Soundly, peacefully sleeping. ‘Home’.

I used to tiptoe into the boys’ rooms quite often. From infancy on up….watching them sleep filled my soul with love. And yes….even to watch my grown son sprawled across the bed like he had been so many many times before throughout the years of his childhood, was magical. To watch him sleeping still takes my breath away. Praying, silently, that while he’s here…. ‘home’…that the pressures of his job, of being a father and husband to his young family…all those worries that come with adulthood…would slip magically away. At least while he’s sleeping. Here. ‘Home’.

Today, the house it still. The bedrooms empty. The silence could be described as hollow. But it’s really not. For echoing in these walls are memories of a joy-filled weekend with Jeff, Ella, Jackson, Tom and Amy. More memories to cherish. And to remember during the silences.

PostScript: The Mary Englebreit poster at the top of the page hangs near our backdoor. It’s one my my favorite of Mary’s works.

Posted by rosecreekcottage-carol.blogspot.com at 7:51 AM

Labels: Barbies, Ella and Jackson, home for Christmas, Home Is Where One Starts From, Mary Englebreit

I LOVE this post because your parents home IS truly home. It sounds like you had a wonderful weekend with them at home! I LOVE that Mary Englebreit poster.

Beautiful post Carol!
This brings back memories for me when I was still living in England and, even though I had my own apartment not far from my family home, "home" was always where my parents were and I would always be there.
Now I live so far away here in Brazil I miss my "home" and my often daily returns to that very special place where my Mum was always waiting with open arms and unconditional love, how I loved our daily talks and all her wonderful advice in times of troubles...
I now feel as if something has been amputated from my body not being able to go home anymore, and even more not having my Mum alive anymore...
I'm kind of sad today as today (21st January) is my Mum's Birthday X

Are you familiar with the book, "Love You Forever"? If not, you really need to get a copy. The moment I read about you checking on ALL the kids while they were sleeping...well...just get the book.

Darlene...Why am I not surprised that YOU would love that poster??!

So happy you stopped by today...you're welcome back ANYTIME! I love getting to know new people!

I love your blog, too, and this post was wonderful...like a breath of spring! I love the way you write...very heartfelt.

Hope your Wednesday is awesome!

Hi Carol, Thank you for visiting my blog . I am so glad you did because now I have found your blog! I looked at your lovely etsy store. Your tiles are just adorable!
I just love your post about visiting your parent's home, because it is so true, no matter where else you call home, that is always your HOME. My mother still lives in the home I grew up in, she is 84. When ever I go there, I feel so safe, I walk around and stare at everything, my old room, my old bathtub, the closet in the hall where the monster use to live...lol I am sure you have made your home so lovely that your sons and grandchildren love to come over and feel the same way. (Especially if you are a Grandma that plays Barbie)
Love, Ann

Lisa and April...I'm glad you enjoyed your visit!

Ann...I enjoyed reading your comment. Yup...Home is always so comforting. Your mother is blessed that at 84, she can still be home.

rosecreekcottage-carol.blogspot.com said...
This comment has been removed by the author.
January 21, 2009 at 2:20 PM

The full refrigerator makes me laugh. I'm 38 but when I un ehm, happen by my parents I always take a peak, and sometimes a bite.

this reminds me of my trips to my parent's home and the joy they feel, and I see, when we return.
they too feel an emptiness in the house when we leave....
I can only imagine for right now, but I fear that it will come all too quickly!
BG

What a beautiful post. Such loving sentiments, one that as moms, we have all felt. In fact, our daughter was home over Thanksgiving and it really felt good to have all my chicks home and under one roof.

Oh MY Carol...yes, there's nothing more wonderful than having the chicks all home and roosting beneath your roof again...and bringing a wee chick along? I loved this post...my Grandprincess also taught me how to play Barbies!
Sandi

I too LOVED this post, it really hit home with me (excuse the pun!). Some of my children are grown and off to university so I look forward to the weekends when they are home again, and I always make sure I prepare their favorite meals. There is always something missing when not all the kids are home. Then, there were your very openly written feelings about going home to Mom and Dad. I think that no matter how old we get, there is always that wonderful feeling of going back to where we came from, feeling that safe secure atmosphere come over us like a warm summer breeze. The world is suddenly okay. Like "The Brit", I live far from where I came from in NJ, and trips home are few and far between. Add to that, the fact that my mother just passed away in September 08, there will no longer be the chance for me to be in that place where I can feel like a kid again. When I go home next I will be staying with sisters, and I know that it will be great too, but just not the same as going to Mom's. I miss her every day now, and feel too like "The Brit" that some part of me has been cut off. I will never be whole again without my parents and that wonderful place from my childhood to return to. "The Brit", if you can see this comment, I am sending you a hug today cuz you are feeling so sad. And Carol, LOVED your post. What a great thing to write about!!! Deborah

Carol, you will chuckle to see another post from me, but I just had to write more. I loved that you stand at the bedroom doorway and watch your kids sleep, no matter how old they are. Not many would admit to that, but I too, LOVE to stand and watch my kids sleep, even the older ones, and remember back to when they were young. Life takes them far from us, but when they are home again, distance and circumstance no longer matters. For they are there, filling our hearts with so much love that it is likely to burst with the hurt of that love. I wish you many many more weekends with your grandkids and Barbies, and all the fun that they bring along with them when they come to visit Grandma. Ánd enjoy those moments of having your children home again, for they are what life is all about. - Deborah

This post touched me, firstly because that special 'home' with mum and dad was never a part of my life but secondly because I believe that I made up for it with my own children...to watch them sleep, even now when FFF comes to stay she lets me kiss her good night when she is 'tucked up'.

Congrats on the Post of the Day mention!
hugs
Sandi