~Calm After the Storm~ 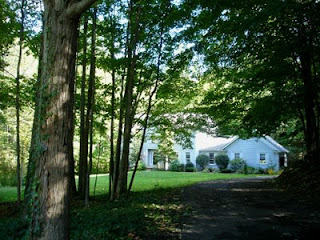 Once again, we have lights, water and phones, although there are still many homes in our county without power. They are now saying some of them may be out for 3 weeks. Not good.

The generator, cords and flashlights are stored safely away 'til next time'. It's so good to have a steamy cup of coffee in the morning, water to shower, and toilets that flush. We are all SO spoiled. I am very aware of that with every turn of the faucet! 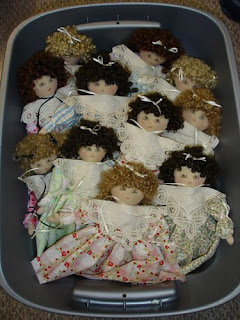 I was surprised at how much I accomplished while the power was out: finished 35 more little Ragamuffin dolls, completed lots more jewelry, and began packing dolls, etc. for my first show.

My friend, Pat Reynolds, who makes the most beautiful quilted jackets and children's wear, will be doing some of the same shows I will. She called yesterday to remind me that in exactly 2 weeks, we'll be setting up for Stan Hywet's Ohio Mart. That old feeling of panic creeped back in. She has that same feeling, so I know I'm not alone!

Along with the inevitable, "Will people still buy my things?" is the oxymoron of, "Will I have enough?". It's a never-ending plethora of emotions that won't quit until the show is over....and then I'll start worrying about the next one! 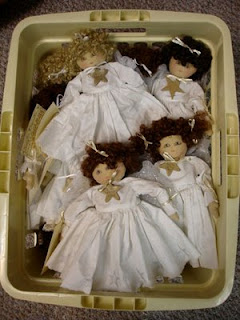 Wish Upon A Star Angels are seen here, ready to be taken to Ohio Mart.

I'm off to my light-filled studio....very happy not to be sewing by candlelight! Have a glorious, 'light-filled" Thursday, in your little corner of the world! 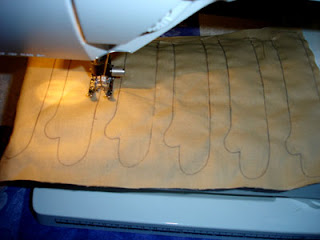 Posted by rosecreekcottage-carol.blogspot.com at 8:38 AM

I wish you great success!

My husband's grandparents used to do a great artist's show in Ohio, in Miamisburg. Ever hear of that one? It was one of the best things of the whole year. They worked at it as a team, woodworking and painting and planning. I'm not sure that they ever made much money from it. I think maybe it was more the participating in something larger.

Now that I am selling a few photogrpahs I understand how there is a real need to have someone want your work. That wanting is such validation.

Your work is absolutely wonderful!

Thank you, Tara!! Miamisburg has some wonderful shows. Because of my boys, I never went that far into Ohio, as NE Ohio has some of the biggest and best around! I know that because of your grandparents AND your photography, that you really do understand how I feel!

Glad to hear your power is back!
We are so fortunate for having "everything" at our fingertips!
So, where can I buy one of these dolls for my little girl?
BG

Wow it looks like you got a lot done!! Glad everythingis up and running nothing like a good cup of coffee to start your morning!!

Your dolls are absolutely spectacular!

I like the assembly line sewing you're doing here. The dolls are beautiful and I'm sure will sale well at your shows.
Mama Bear

Carol, hope you have a great time at the show!

I hope your weather calms down now. I can't begin to imagine what people in Texas are dealing with! It's just so sad to see. In Sacramento we're having unusually beautiful weather and I have to say I've felt a little guilty about it!

Your pictures on your blog are always so beautiful! I always feel like I've had a little vacation after I've visited. :-)

Glad your power is back! I'm gearing up for a show this weekend in Barberton: The Mum Festival. I did really well there last year and am praying for good weather! Good luck with your shows and look for me in Aurora!