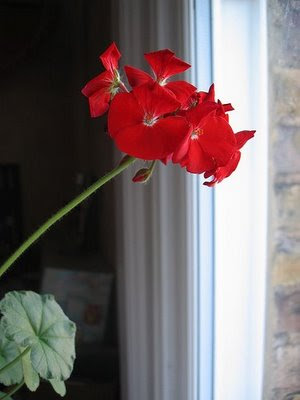 It started out as an ordinary day. Or so I thought. I baked a pumpkin pie, took some to Mom at assisted living, and we shared it before going outside to enjoy the last of the unseasonably warm November day. As I wheeled her into the courtyard, a white-haired woman flagged us down, inviting us to sit with them. The woman, Irene, introduced herself and her friend, Mary. Like my Mother, Mary was wheelchair-bound, and had only lived there a month….which explained why we had never met her before. Irene explained that she had worked for a home-healthcare agency, and had taken care of Mary before it was necessary for Mary to live in the assisted living facility. A friendship had blossomed, and Irene continued to visit Mary a few times a week. I thought to myself that this Irene was a kind, sweet soul to do this. There was an obvious 20+ year age difference between them.

We chatted a bit, when Irene looked at me and said, “I don’t want to ‘freak’ you out, but there’s a man standing behind you”. I told her I wasn't. I was used it.

Irene continued, “He is tall, has a big smile on his face, and light brown hair”. I was elated. My father. It must be. I smell his cigarette smoke quite often, and I was sure this was him. She said, “He has on a brightly-colored flowered shirt. Like a Hawaiian shirt, but not with palm trees, just flowers.” My heart fell. No….that wasn’t my conservative, vee-necked sweater, shirt-and-tie, all-business father. My mother’s face fell. Was this women toying with us? Was she simply a whacko? Mom and I exchanged looks. My Mom is quite used to these kinds of experiences, too, as is my sister and my late brother. But we had our doubts about this new acquaintance. This stranger.

All-of-a-sudden, Irene stood up, and touched her eye. “Something’s wrong with his eye”, she said. I screamed, “Oh my God! It’s my FIL!”. Irene said she was sorry I was upset. I wasn’t upset. Just a bit disappointed and surprised. You see, my FIL had a glass eye. It had been shot out with a BB gun when he was a child. Not a ‘typical’ characteristic like height and hair color. And yes, he wore flowered shirts. Again….not a typical attire for a man living his entire life in the Midwest. But Mom and I were still skeptical. We said nothing, waiting for this woman…this ‘Irene’ to show us something more. Something we could be absolutely sure about. 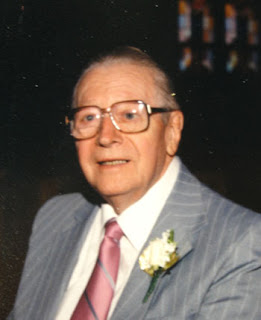 She continued, thrusting her tongue around her mouth and sniffing, “I’m tasting something strong. Like liquor. Whiskey, maybe. I don’t know. I’m not a ‘drinker’”. That meant little to me. My MIL was a recovered alcoholic, and I seldom saw my FIL drink. “He says to tell you it’s ‘C-C’”. Once again, this meant nothing to me. “He said he used to ‘sneak’ it”. Again….I didn’t know.

“He said to tell you he loved geraniums. They’re so bright. And they’re easy”. Well….there had been geraniums in their yard…but…..

Before we parted, she said that he wanted me to know that he intended to have another conversation with me, just he-and-I, one-on-one, before he died, but he never did. He wanted to know he was sorry it never happened, and was I okay with that. Yes…I understood that perfectly. In the 30+ years of my marriage, he and I had exactly TWO of the conversations he was speaking of. Two specific conversations that I loved him for. They were on the same subject. They were the only two times I ever remembered speaking solely with him. So, no…we never talked one-on-one again. I told Irene to tell him I understood. And I was okay.

Irene has had this ‘gift’ since she was five. At the age of 16, her family tried to have her ‘committed’, as they couldn’t understand why she talked about ‘seeing’ dead people. That was in the 50’s. The beginning of all the talk of ‘life-after-death’. Before the time of Elisabeth Kubler-Ross’ work on death and dying, the grieving process and out-of-the-body experiences. Yes…before John Edward came forward with his books and TV show, and before The Ghost Whisperer.

Irene asked if my husband was understanding of my ‘gift’. I told her that yes, he was. She said I was lucky. Her marriage had ended in divorce because of it. I shook my head. I felt her sadness.

We exchanged phone numbers, and plan to get together for lunch. I have a feeling it will be a long one!

As soon as I had a chance, I called my husband, and asked him if his dad had a favorite drink. “Yes….he drank Canadian Club. He called it his ‘CC’”. He snuck it so he wasn't drinking in front of my MIL. I asked him about the geraniums, but he didn’t know. I talked with my SIL, and asked if dad had a favorite garden plant. Without hesitation, she said, “Oh yeah. He LOVED geraniums. He said they gave SO much color, and were just ‘easy’ to plant”.

This post won a Post of the Day award over at authorblog. Take a peak at the other winners for some wonderful reads! 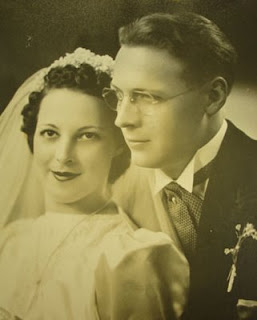 Posted by rosecreekcottage-carol.blogspot.com at 8:10 AM

See? Now was that so hard? ;) Just keep sharing those gifts my friend...it's why God placed you into so many of our lives...and me? I'm so grateful He did.

What an absolutely beautiful post. I feel honoured to have read it. Thank you for sharing this wonderful experience.

Wow, that's quite a story. There are more things in heaven and earth...

Wow Carol!
That was amazing! I have had some contact with mediums over the years and am also very sensitive to energy around me, I continue to be very interested in this subject!
I hope you post some more soon and I'm very happy for the wonderful message that you received!
All the very best!

That is awesome! Experiencing like this are always so comforting and amazing to hear. Thank you so much for sharing it. :)

You're right, Mel...it was easier than I though!

Crystal jigsaw...Thank you. I wasn't sure how some would take it...but it is what it is!

Suldog...You are right: there's so much there we don't know or understand...yet!

the brit....Thank you! The energy is hard to explain, isn't it?! I have lots more to post.

kat...You are welcome! It is very comforting. We just have to be tuned in to it!

Fascinating post. There's so much more to people, animals and nature in general that we see on the surface. One of those wonderful mysteries.

nothing ordinary about that day! What a "coincidence" meeting Irene - like you, I don't believe it was a coincidence, but a gift. And, if you're not open to those gifts, you can't receive!

This gave me chills! I think it's so wonderful that your FIL wanted you to know for sure that it was him and that he cared for you deeply. What a beautiful story!!!

hilary...they are certainly mysteries that I hope we will understand in the afterlife.

Thank you for taking the time to comment on my blog. I found this post of yours very interesting. I'm going to have to read more of your blog!

What an incredible gift you have! I enjoyed this post and wish I had a little of those abilities but I have zero.

I'm so glad you visited my blog because I so enjoyed reading yours!

You gave me goosebumps in a good way. What a lovely story.

There is no such thing as an ordinary day, is there, Carol?

Its posts like these that give us hope for tomorrow...of course that tomorrow may be on another plane, in a different room but hope all the same. Thank you for this post, it says so much about you that you couldn't say any other way. Congratulations on Post of the Day
Sandi

Hi, you've been MEME'd. Sorry to spoil your Sunday!

I'm intrigued by your post, especially since it was so tender.

I've had mostly unpleasant experiences with this sort of thing - been roused from my sleep a few times to have 'someone' standing next to me. It's a little disconcerting, do you ever get used to it?

This post was touching, it brought tears to my eyes. I love that you and your family embrace your gift and all are so accepting.